You Want to Start Over

I’m with my Dad in the emergency critical care, one hand on his shoulder and the other on his arm. My youngest brother is also in the room. Piping and wiring are growing out of our father and his face is shrouded in an oxygen mask. A white sheet inters him to the neck. He used to be huge, outsized and wild, but now he is smaller, the way older people can get. Except for his eyes: his eyes are still an Ottawa Valley sunrise, a Caribbean sunset. We’re there, my brother and I, trying to comfort him, to make him laugh. You don’t treat a man otherwise. You don’t forget who he is.

Dad, I say, remember the joke about the four nuns? Want me to tell it? Yeah, he mumbles, though mostly he just nods. Of course he remembers the joke: he told it first, way back when.

Four nuns are driving around Central America in a VW bus…

I am still massaging my father’s shoulder, and he is still chuckling at the joke from behind the mask and beneath the sheet, when he emits a long deep gasp, an aahh sound I’ll go to my own grave remembering. The nurse looks at my brother and me and says: He’s gone. What do you mean, gone? I say to her. Another gasp follows, although the machine monitoring his pulse no longer beeps. Turns out that as the body shuts down, the lungs still struggle for air. It’s not all Eden at the end; we don’t just close our eyes and drift gently away. There’s resurgence and resistance. There’s fight. Look, look, I say. No, he really is gone, the nurse repeats. Sorry.

I’ve kept his hospital admission bracelet, for no particular reason. I keep it in a box.

Three years we live in Barbados while my Dad builds houses. He has flown down ahead of us, and I’ve spent the days he is away watching the sky over our house, looking for him up there, maybe waving to me from the jet window. I’ve also asked him to bring back a piece of cloud. Stuffing cotton into a Birks box, he returns with the gift. Here, Son, he says, now you can touch the sky whenever you want. I am a kid of nine, shoeless and shirtless in the Caribbean, and am revelling in stories about Sam Lord, the pirate who constructed a castle on the island’s southern tip. Sam Lord hung coconut lanterns along deserted beaches to trick merchant ships into thinking they were natural harbours. The ships would run aground on the reef and he and his crew would loot and murdered-a-plenty. I’m on a strand at sunset when I stub a toe on what I mistake for a coconut. It’s a skull, a bullet hole visible.

Then the crew excavating the building site find an entire pit of skeletons and bones. A mass grave, possibly dug by pirates. Locals, fearing unsettled spirits, won’t venture near it. But my Dad, who loves cemeteries, loves stopping in country graveyards to read the inscriptions – once, in Barbados, where shallow topsoil means graves are mostly above ground, he cuts the engine on our jeep and glides us downhill into a cemetery, into the stillness and silence, laughing as my brother and I, having held our breaths as long as we could, burst our lungs – strolls right into the pit. He pulls out another skull and gives it to my oldest brother. Rescues it from the dark. Holds it up to the light.

Years later, the same brother, who has kept the skull in a box in his house – kept it reverently, showing no disrespect — decides its presence might be the cause of a run of bad luck. Though the least superstitious member of our clan, the brother decides he must make amends. He knows a beautiful spot at cliff’s edge overlooking the Ottawa River, an hour east of the city. He drives to the place and hikes in from the road, bringing a shovel. The skull gets buried again, where it has a view of earth, water, and sky – eternity, in effect.

My brother doubts he could find the grave now. It is unmarked, also, its not for finding.

In 1934 my father makes a sign and nails to the door of his tree fort. He, too, is nine and the fort is in the backyard of his mothers’ house in Sandy Hill. Onto a dark shingle he paints a skull-and-crossbones with the words KEEP OUT scrawled beneath. Eric Lahey, pirate boy. The bones aren’t well drawn but the skull isn’t bad, for a kid.

After he died I had the shingle restored and framed. It hangs by the door in my studio. Every day I look at it, on my way in, on my way out. I have painted skies and oceans, trees and flowers. Now, humbly, with all due reverence and respect, I paint this skull.

From Keep Out, a work in progress. 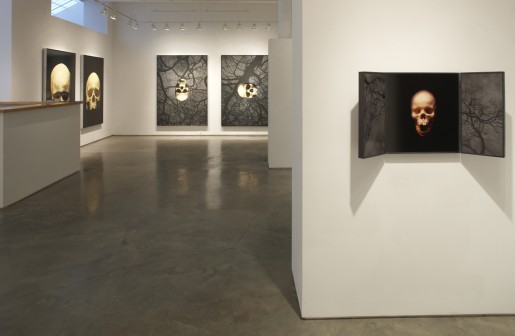 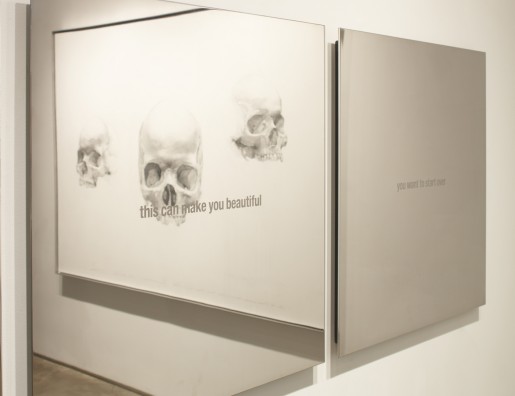 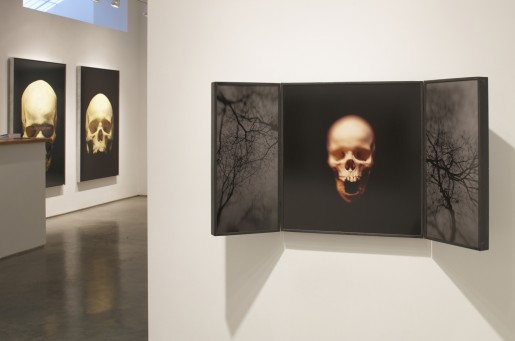 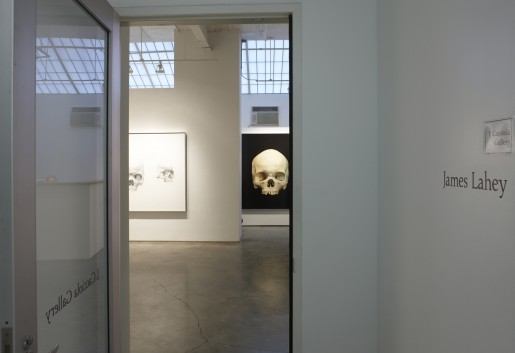